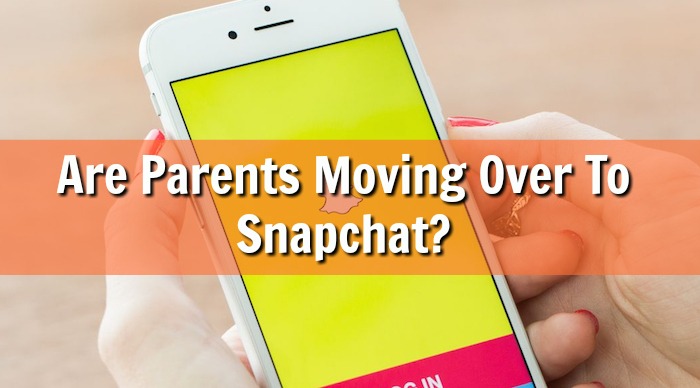 Are Parents Moving Over To Snapchat?

Those who set up their Facebook account  over five years ago will remember the heady days when the majority of the demographic was aged between 16-30. Facebook used to be cool, it used to be young & hip community strictly for a youthful generation.

A place where young people could: interact with their friends, classmates or work colleagues, upload drunken photos of some random Tuesday Tequila session or just to have a good old fashioned rant about anything and everything.

Then, out of nowhere,  it all changed. Much like a scene from Hitchcock’s The Birds, parents began flocking to the platform en masse and setting up accounts. People were now faced with the surreal scenario of receiving a friend request from their Mother, Father and Grandmother.

Old embarrassing childhood pictures began resurfacing, the general tone became awkward and users were now on their best behaviour. The fun was well and truly over.

That was until Snapchat came along. The launch of the ephemeral messaging mobile app came as a breath of fresh air to young folk who had become disillusioned with Facebook. This was an app strictly for teenagers and early to mid twenty-somethings, a safe refuge free from parental intrusion.

The consensus was that parents were only getting to grips with Facebook making Snapchat a completely safe haven for the long term. In fact, back in 2013, American smartphone users over 35 made up just 2% of Snapchat’s overall usage demographic with over-25s making up just 7%. 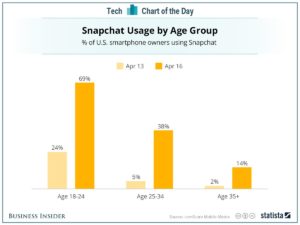 Fast forward to 2016, in the past few years, Snapchat has made huge inroads in terms of monetising the platform by reaching out to large corporations to encourage advertising. Suddenly Snapchat started to make the news and older folk.started to sit up and take notice of the burgeoning platform.

A recent report from data analytics firm comScore, has found that around 68% percent of Smartphone users between 18-24 use the service. The report also found 38% of user between 25-34 and 14% of users over 35 are now active on Snapchat. This represents a massive leap from just three years ago.

Snapchat’s continual introduction of popular new features and engaging content has also sparked an interest in a wider demographic such as live stories and filters. Quirky features such as the puppy dog filter and face swap are simple to use and allow for an accessible experience for all ages.

Snapchat’s Discover feature also offers a visual news section within the app which showcases stories from publishers as such as the Wall Street Journal, The Daily Mail, Vice, National Geographic and People magazine.

An average 19 year old wouldn’t be too concerned about the WSJ’s latest offering but an average 30+ professional certainly would. So it seems that the addition of these varied features must stand as concrete evidence that Snapchat is purposely aiming to broaden its reach to cater to all all demographics. Why? It boils down to simple economics, more users mean mean more viewers for Snapchat’s sponsored content.

reasons why not to introduce your parents to snapchat pic.twitter.com/Uoox2Ldd8Y

The more views that this sponsored content received, the higher the cost that Snapchat can command for advertising on the platform. Furthermore, a Snapchat spokeswoman for has actually endorsed the rise in older users In an interview with the Wall Street Journal stating:

“Our community enjoys having their parents on Snapchat because it’s a really fast and fun way to communicate,”

“We don’t have the public likes and comments that often make for awkward moments on traditional social media. It’s never been an issue”

While Snapchat remains a prominent domain for younger people, the rise in older users shows no signs of slowing down However, it’s clear that the platform will remain popular in the foreseeable future with teenagers due to it’s stress free privacy features and it’s concept of disappearing self-destructive content.

While it could take some time for the platform to lose it’s “cool” factor if the trend continues, one still has to wonder about which platform will young people turn to next?